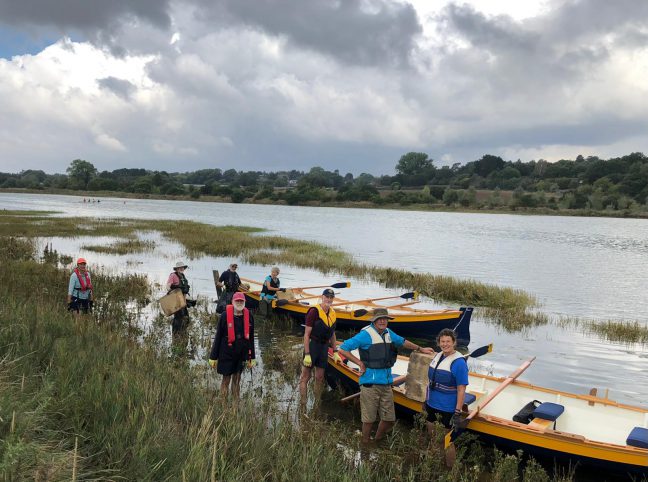 On 10 September, the WCRC joined the Transition Woodbridge event to help remove litter from the river.

Whisper and Whisstock were both fully crewed and spent time at Kyson Beach and Martlesham Creek pulling all manner of things out of the river.

At the end of the outing, the rubbish retrieved was added to the heap outside the 5th Woodbridge Sea Scouts ready for collection by Norse on Monday. 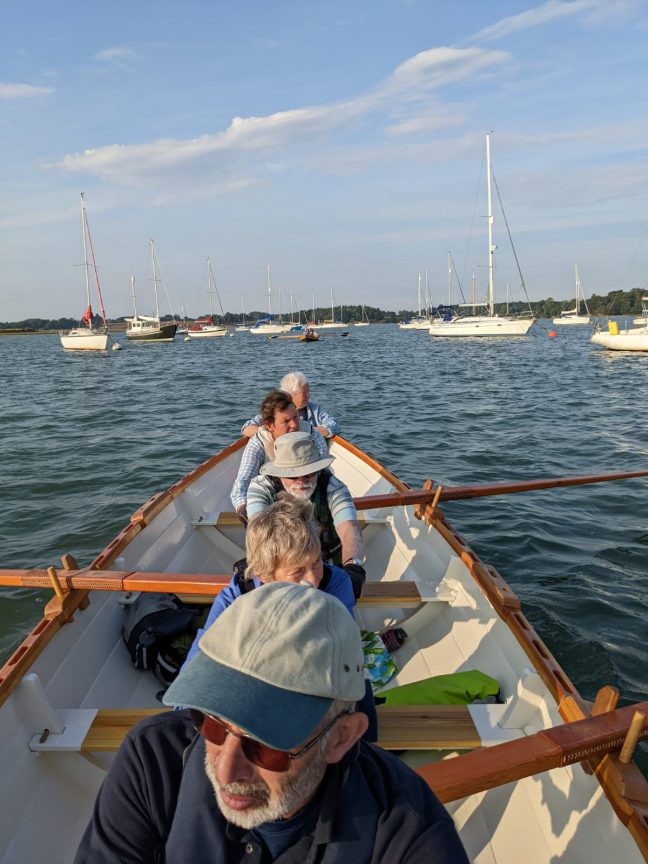 After a last minute change to crews and transport

The skiff’s covers were finally undone!

But Jo ran back with them to the dinghy park

So there was plenty of room inside

Whisstock was launched first with her magnificent crew

I’m biased as I was one of them

But Whispers crew were brilliant too!

Whisper went first to the pontoon, to ensure there wasn’t a fall

In fact all her crew were very nimble

And this was not needed at all.

It was not a race…supposedly all for fun

But when Whisper was drawing nearer to Whisstock

The Whisstock crew became rather glum!

With tide and wind against us,  we rowed with all our might

But in fact it was not too long

Before The Maybush came in sight

The socialising had begun!

It took some effort to drag one of the cox away

The other was keen to have the tide with us

For a least a little part of this day

Two travelled back by car and others swapped their seats

Our great day out complete

To Dave & Julian, our able cox and

On the 2 May, we proudly launched our second St Ayle’s Skiff onto the river Deben.

Big thanks go to Brian East, who managed the building project and took the stroke seat for her first outing. Thanks also go to Julian Taylor who played a big role in her construction and other committee members who all played their part.

‘Whisper’ was joined by our first boat ‘Whisstock’ on the water for an afternoon of short trips followed by lots of tea and cake. Crews switched in and out for a quick blast through the cut and past Kyson Beach while there was enough tide.

Rather than using the traditional champagne, Brian was handed a bottle of ‘Proper Job’ to make the occasion (which he promptly finished off when his turn to row ended).

It was a lovely afternoon, and a format that we will repeat. 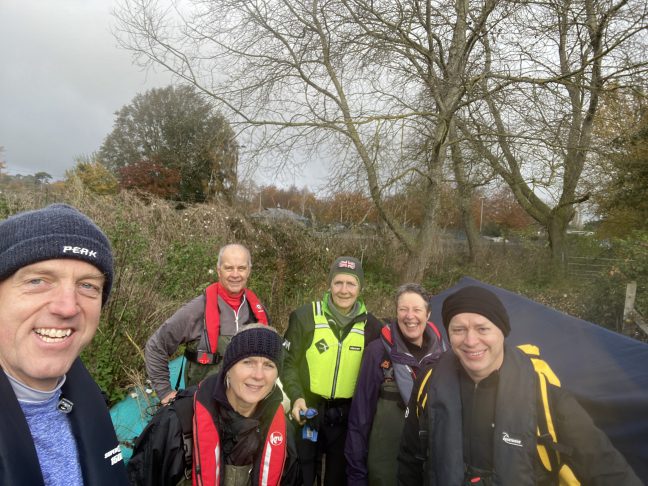 In October and November, Jacq ran our first coastal Learn to Row course and would like to welcome Saska, Carrie and Stephen to the club.

Having watched the training video’s, talked about safety and boat handing in a land session the new crew, with the help of Andy, David and Julian took to the water. The forecast over that weekend was awful but both days turned out to be lovely and calm with just a little mizzle on the last day.

Having practised taking off, landing, turning, swerving, rowing at different pressures and speeds, slaps, chops and emergency stops the new crew then did their ‘Man Overboard’ training and saved Bob (aka a large white buoy) from the depths of the Deben.

By the end of the weekend, the crew were rowing very well and all graduated with big smiles. If Saska, Carrie or Stephen sign up to row with you, please introduce yourself and help them to put their new skills into practice. 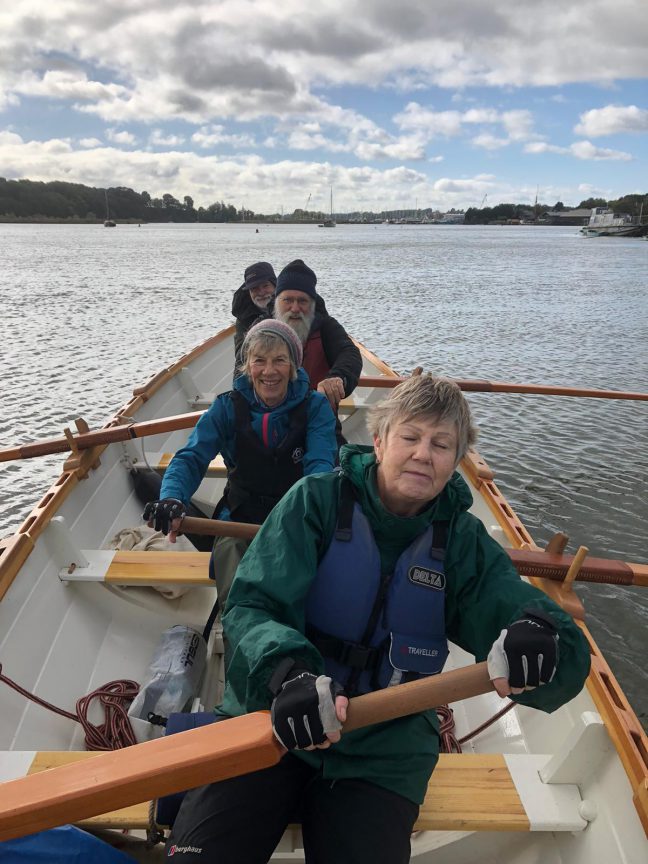 An interesting paddle for the crew as high tide prediction was 4.0m, but the actual tide was 4.85m. Nearly 3ft over predicted, on top of a 4.0m spring tide. This is possibly the highest viewpoint we will ever get from the river.

However, we would still be on the wrong side of Wilford bridge now if we had carried on, not much head room!.

Therefore the return to the sailing club was a good choice and thanks all for the row. Julian 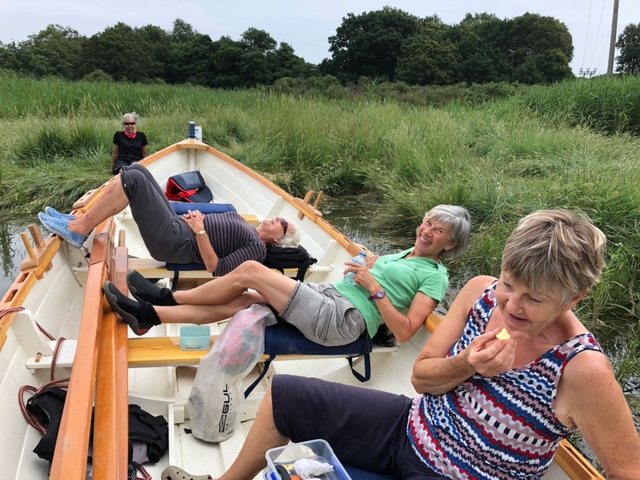 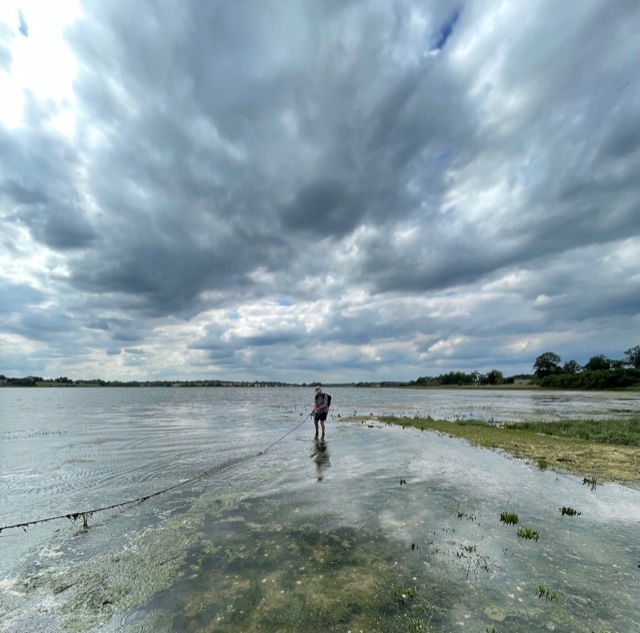 Wednesday 21st July 2021
When we launched at 8.30 am all was cool and peaceful on the river. Simon took us down to the Tips and by then we were very glad of the shade provided for our coffee break. Caro brought us back upriver to the DYC slipway which by then was surrounded by noisy teenagers enjoying swimming in the Deben.  It was heartening to see them all move away as soon as we approached… two lads brought our trailer down to us and a group of girls offered to help with getting the skiff loaded. The welcome was as warm as the day had become! And for once Julian was able to row for the complete trip!

Monday 14th June 2021
A hot day for rowing down to the Hams. We were all glad of Fiona’s encouragement to take our swimming gear so we could cool off in the river before drying out on the shore as we enjoyed a well earned tea break. For some of us it was our first ever swim in our river – Fiona does it daily!
Unfortunately, we have no photos to verify this but John did take a beautiful shot of Julian retrieving our anchor. How fortunate we are to have our skiff and our river. 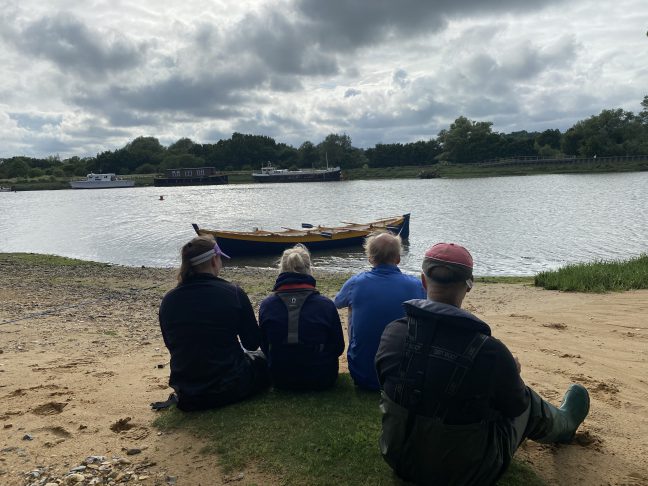 Although we planned a lovely summer evening row on Friday 18th, the weather didn’t play ball so we avoided the wind and rain in favour of much nicer conditions on Saturday evening and took a trip beyond Wilford Bridge. As ever we scared the tourists on the far side when yodelling as loud as we could to get the echo to resonate and expand.

Rather than make crumbs in the boat we went to the kayak and paddle boarders beech on the Sutton Hoo bank to eat our lemon drizzle cake and leave messages in the sand to show that we can get to the beach too!

We didn’t have enough stones to spell ‘skiff’ so we settled with ‘gig’. 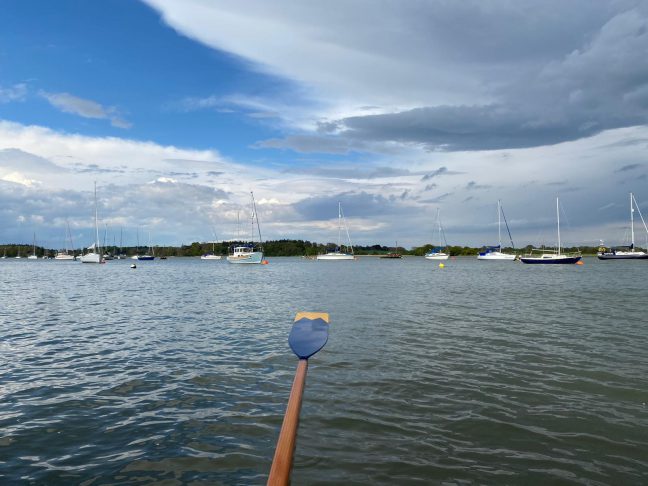 We spent a lovely evening on the water, spotting seals and eating chips and brownies – all the time being chased by the next black cloud but never being rained on. It’s unbelievable that we got away with it because it was always raining in the distance.

It was a hard pull against the tide in both directions so we agreed that the sugar indulgence was well justified. 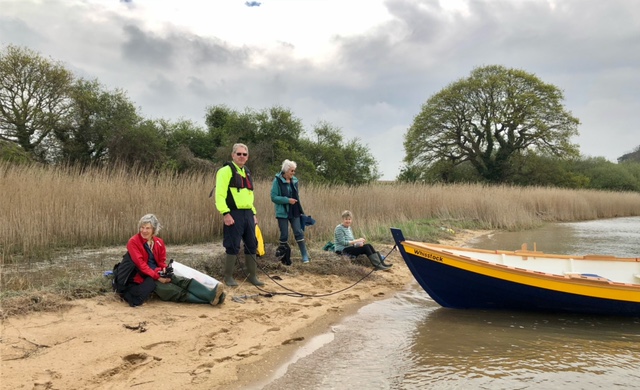 Wind, rain and a flood tide to battle against on the way there then lunch in the sun.

It was a good row and in terms of the need for a serious adventure every year. But the crew decided it should suffice as the adventure of the month.

The photos below evidence of the sunny beach as promised by the outward cox whilst the crew were battling the less desirable elements!