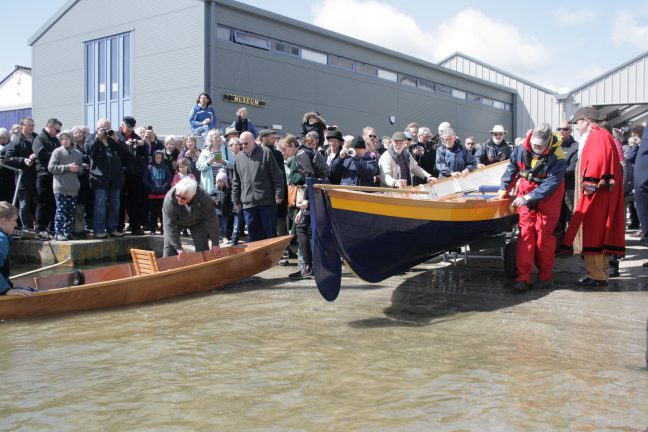 On the 4th May 2019 the Woodbridge Coastal Rowing Club came alive. The recently formed committee and first handful of members celebrated when the newly built St Ayles Skiff was named and launched for the very first time.

The naming ceremony was introduced by Pete Clay from the Woodbridge Riverside Trust and Sutton Hoo Ship’s Company and then led by Sue Cox, daughter of Claude Whisstock who previously owned the Whisstock’s Boat Building site where the skiff has been lovingly built. The committee, crews and other visitors raised a glass at the appropriate moment when the boat and river were blessed to

Once named ‘Whisstock’ was launched on the river Deben for the first time, accompanied by the Blakeney CRC in their own St Ayles Skiff, the ‘Hoo Canoo’ made by Just 42 and also launched on the same day and Sae Wylfing the half length Sutton Hoo Ship crewed by the Deben Rowing Club.